The Ramallah Club of Metropolitan Detroit is part of the American Federation of Ramallah, Palestine which is a non-political, non-profit organization IRC 501(c) (7).  Each member can trace our family lines to the founders of the city of Ramallah, which serves as the provisional seat of Government of Palestine.  Our purpose is to help maintain the culture and heritage of the Ramallah people and to educate our children and the public our culture and heritage.  As one of the largest communities of descendants from Ramallah in the United States, we are proud to serve the Detroit community in many ways. 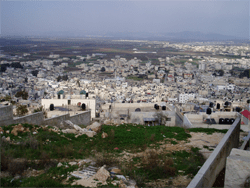 The early settlers to Detroit started arriving in the 1920’s. As they settled and opened businesses they encouraged others from the ‘Old Country’ to join them. As the community grew, the idea of forming a Ramallah Club in Detroit first surfaced in the late 1940’s. A small group of students first created a student organization, the Hathihe Ramallah (this is Ramallah) magazine on the campus of Wayne State University in 1947. The Hathihe Ramallah magazine served as a vehicle to maintain social ties with other immigrants from Ramallah throughout America. Shortly afterwards, the Ramallah Club of Detroit incorporated in Wayne County as a social, cultural and educational organization.

In the early 1950’s, meetings were held in homes of our members. As the community grew, the Ramallah Club started to meet at the YMCA on West Grand Boulevard at Dexter. In the early 1960’s, they started meeting at the YMCA on Grand River at Beech Daly. In 1992, the Ramallah Club of Detroit purchased its clubhouse in Westland. This property also serves as headquarters of the American Federation of Ramallah, Palestine which was established in 1958.

Today, the Ramallah Club of Detroit has an active membership of three hundred amongst 600 households in the Metropolitan Detroit area. We are proud of the success and accomplishments that the Detroit community has produced over the last fifty years.

Want to Get Involved?